We strongly encourage pre-registration for webinars. It helps speakers tailor their presentations to the audience. Thank you!

Please contact us if you seek an event that is not listed. 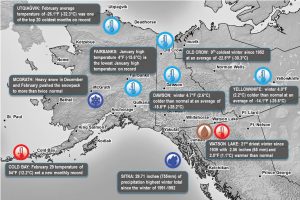 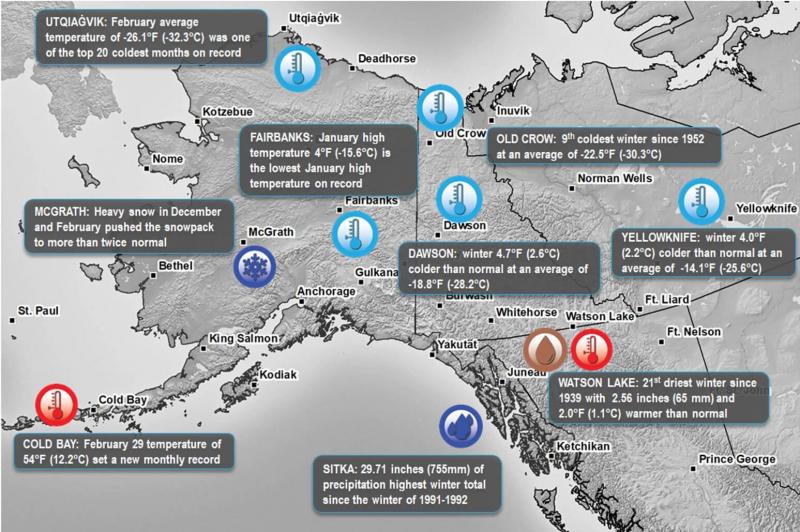 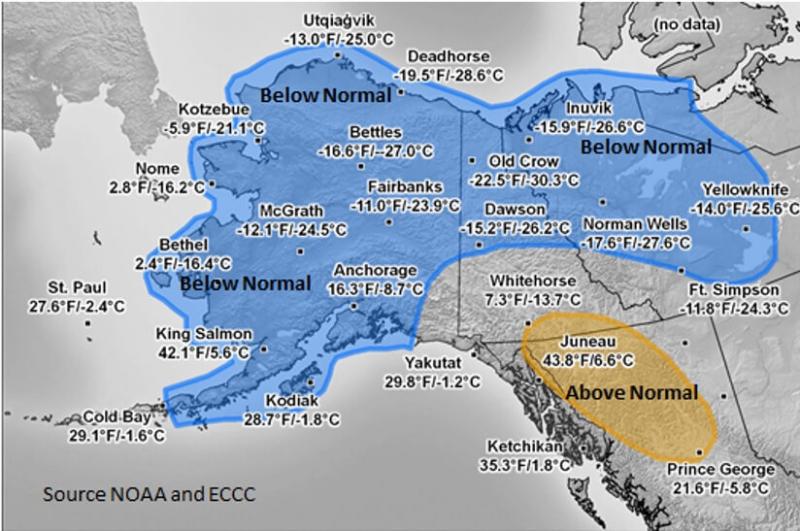 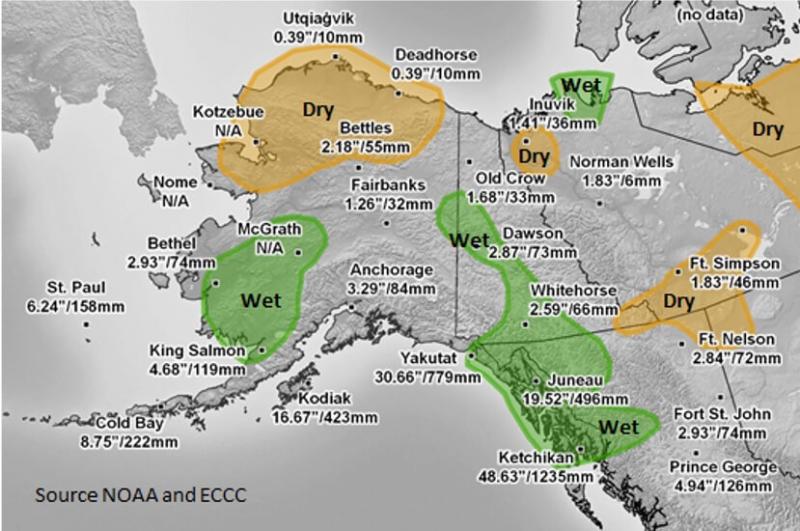 Early December 2019 weather was warmer and drier than normal. This was largely due to the absence of El Nino effects and the presence of the warm “blob” of water (3-5°C warmer than normal) in the Pacific off the coast of BC (referred to as “Blob 2.0” on next page).

As the blob dissipated the conditions changed to near normal. Snowpacks were well below normal in northwest-BC, Yukon (YT) and Northwest Territories (NT) in early December. However, early January atmospheric river events delivered precipitation that restored the conditions to normal and somewhat above normal wetness in northwest BC, southwest YT, a small area east of Inuvik and southwest Alaska.

At the end of February there was also a record snow accumulation of 39 inches (99cm) in Mayo. When this snow melts, it may relieve the long standing drought in the Mayo area. This past winter was the first normally cold Yukon winter in the last few years. It will likely slow down the spread of the pine beetle. Dawson, YT dipped to -54°F (-47.7°C) on January 10. From February 10-11 Whitehorse received a significant 11 inches (28 cm) snowfall (as shown in the figure below). 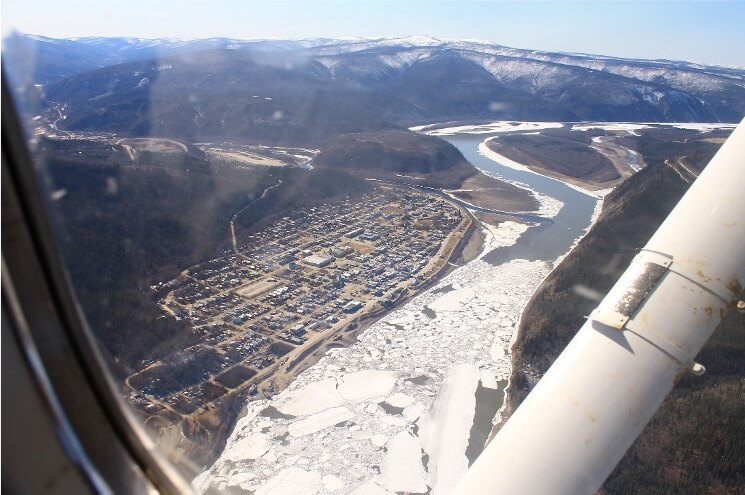 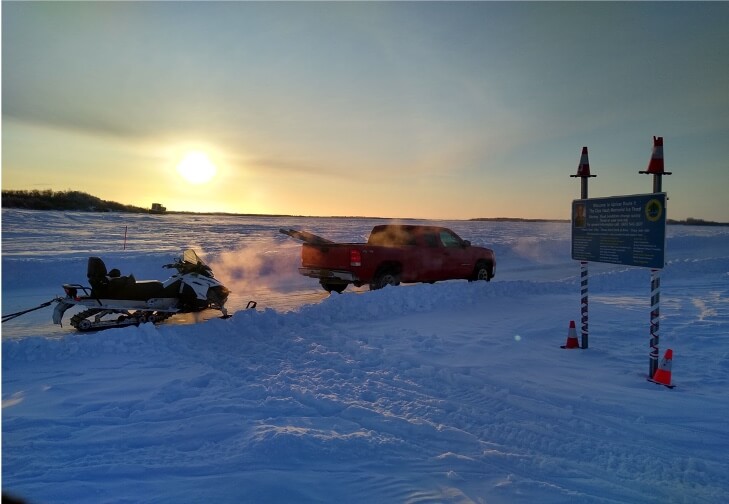 The rivers of interior Alaska are vital transportation corridors. Little permanent infrastructure exists between communities so residents depend on the seasonal freeze-up of water bodies for cultural and economic connectivity.

Most years, snow machine trails are created and maintained between communities. During cold winters, like this winter, a plowed road suitable for vehicles is established. This year’s road begins near Tuntutuliak, southwest of Bethel near the Bering Sea coast, and continues upriver to Sleetmute – a total distance of 355 miles (575 km). According to Alaska Public Media, it’s the longest ever road on the Kuskokwim River. The road even has a formal name: 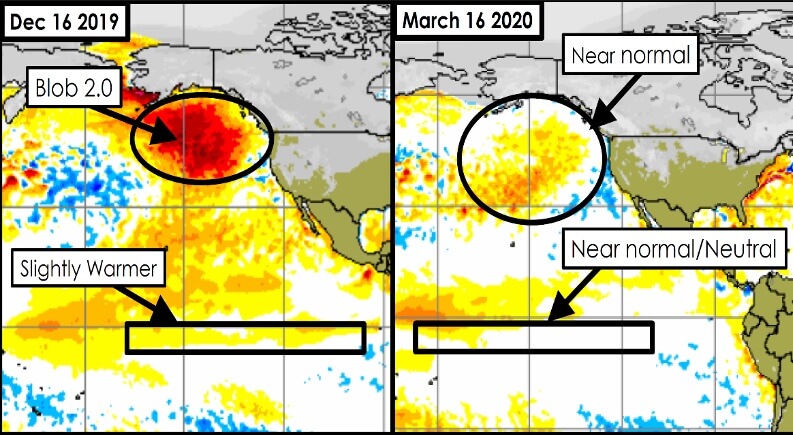 The so called “Blob 2.0” was an area of the Pacific Ocean where the surface temperature was 5.5 to 9°F (3 to 5°C) above normal. This area dissipated and by early January conditions on the right side of the graphic prevailed and led to a return of near normal winter conditions. 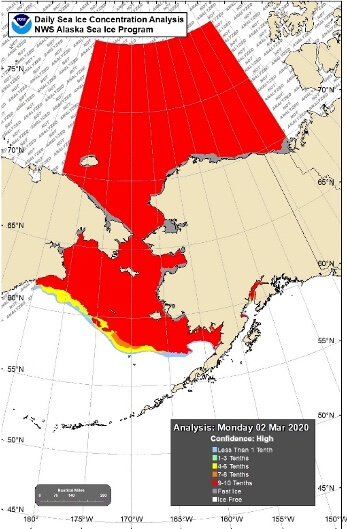 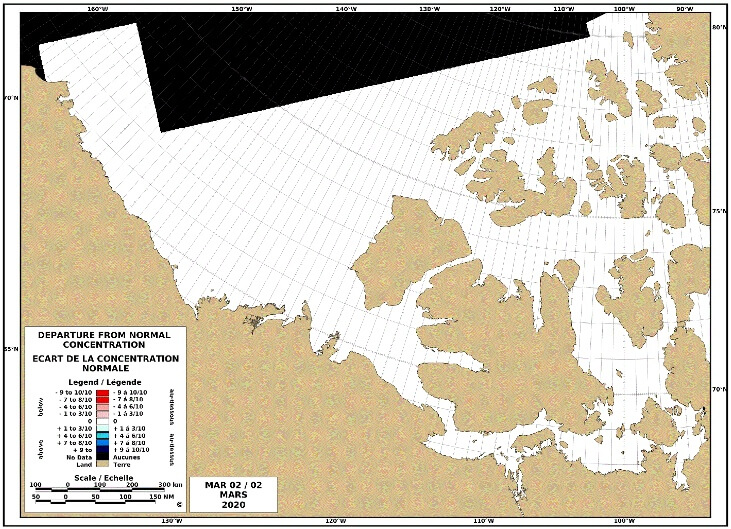 Sea ice in the Chukchi and Bering Sea began December with much lower extent than is historically typical. Ice extent exceeded 95% of the Chukchi Sea on December 22, the third latest “ice-over” in the 42 year satellite record. Sea ice on the Bering Sea grew out from the Alaska coast during December but was slower to move through Bering Strait and did not reach the north shore of St. Lawrence Island until about New Years Eve. Ice extent continued to increase in early January but growth was halted by a couple of storms mid-month. Thereafter the ice extent expanded, and was slightly above the 30-year average during the last half of February. However, ice had not reached Pribilof Islands by the end of February. Ice conditions on the Alaska coast north of the Bering Strait were much better than the past couple of years. In Canada, the Western Arctic sea ice reached maximum extent in January despite a slower than normal freeze-up during the fall. Complete ice coverage continued during the remainder of winter with near normal ice thickness due to slightly below normal temperatures.

A combined Canada - USA forecast model is used to provide a temperature and a precipitation outlook for March to May 2020. 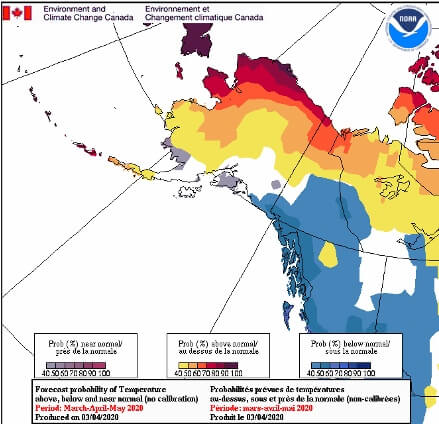 The temperature outlook map shows that central and northern Alaska north and central YT and NT have a 40-90% chance of above average temperature (yellow-brown colors). The highest probabilities are in the northern coastal parts of Alaska, including the western half of the Aleutian Islands and northern Canadian arctic islands. Exceptions are the southern half of YT and most of central and southeastern NT where near normal or slightly below normal temperatures are probable. 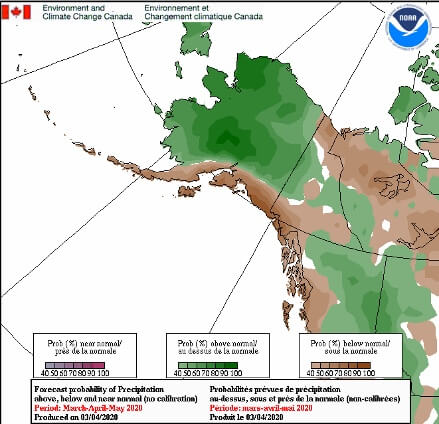 Content and graphics prepared in partnership with the Alaska Center for Climate Assessment and Policy and Environment and Climate Change Canada (ECCC).